A two-time national champion in ice dancing, Jonathan Zhao plans to bring the discipline he learned training for competition to his Carolina academics. 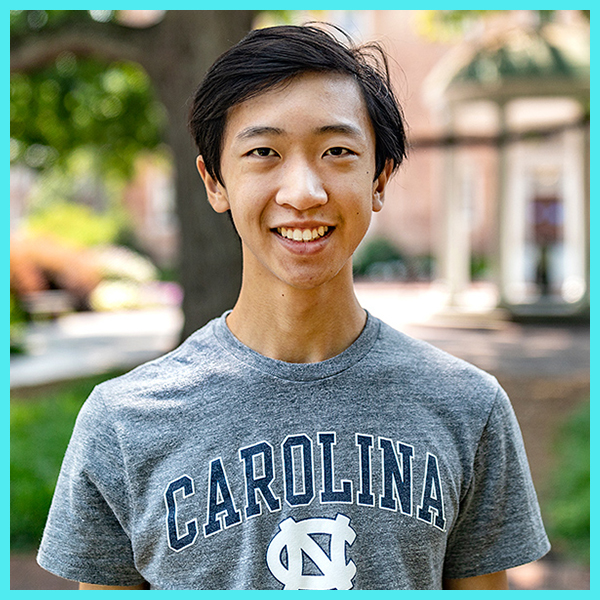 In Chapel Hill, the UNC acronym stands for more than just the University of North Carolina.

With more than 80 team and individual national titles held by Tar Heels, UNC is also proudly short for the University of National Champions.

This fall, the Carolina community will be adding a new community member who has a few national championships of his own: Jonathan Zhao.

An incoming first-year student from Cary, Jonathan Zhao is a two-time national champion in ice dancing — figure skating that is essentially ballroom dancing on ice. Whether it was skating on the ice two hours a day, five days a week or off-ice ballet training, he has dedicated himself to his craft for more than a decade.

It’s that discipline he plans to bring to his time as a Tar Heel. Learn how Zhao hopes to tap into his ice dancing success to excel at Carolina.

When did you start ice dancing?

I started figure skating when I was 4 but then switched to ice dancing around middle school. At first, it was something my mom wanted me to try when I was young. She has always been interested in ice skating, so she took me to the rink one day, and I started to really like ice skating.

Ever since then, I’ve been slowly working my way up. Over the past few years, after switching to ice dance, I’ve won the national championship at my level twice (2019 and 2017.)

What has kept you in the sport for so long?

There’s a lot to ice dancing that I like. With the music, you can create a story with it, and then you bring that story to life on the ice. That’s something that I’ve really enjoyed doing. Besides that, I like the feeling of skating, the wind brushing through my hair. And then just working with my coach and my partner. It’s something that I enjoy.

What do you plan on studying at Carolina?

I want to study computer science, and I’m also interested in business. UNC is where I could do both. Both of my parents are computer programmers, so I’ve been around that stuff for a long time, and I’ve taken an interest in it. Since I was in middle school, I’ve had a dream of starting my own business, so I want to merge my two interests together and eventually start up my own company. I’m looking into artificial intelligence and machine learning right now.

What are you most looking forward to in your first semester?

Getting to know people. Going to my first classes. Going to some social events. Just the college experience. It’s about making friends that last for a long time, learning things that you can use for your future and studying things that you’re interested in. Computer science, for me, is something I like, so I wanted to study that, then it’s just going to social events and enjoying the freedom that college brings.

What do you hope to bring to the Carolina community?

One thing that I hope to bring is my interest in ice dance. I hope to share that with my friends, the clubs I join, the people around me and maybe take them ice skating sometime. Besides that, it’s the things I’ve learned from skating, like teamwork and perseverance. I want to bring that to the community and try my best here.